This series is designed to let people know about simple ways that physics affects their workout world and some simple concepts they can use to modify workouts or possibly even make them more effective and safer at the same time.  Yes, I admit I am in full nerd mode here but this is just how I get through the day. 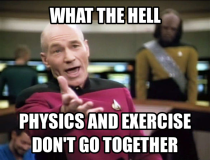 As trainers we talk a lot about tempo – or at least some of us do.  Some trainers think a tempo is an old type of car.  It is defined as “the rate or speed of motion or activity”.  To break this down further, it means velocity, and since in the fitness world velocity has a distance vector with something attached to it we can talk about acceleration.

Fundamentally this affects the amount of force your body provides onto a movement or therefore into a joint or series of joints.

What I want you to think about is the concept that the faster you want to do something, the more force is needed to move it taking into consideration the mass in question.  At that point, the actual weight involved can be part of the movement, but does not have to represent the entire situation.  For example, if you are bench pressing lying on your back and you lower the bar twice as fast with downward acceleration, the force required to reverse that acceleration and push the bar back in the other direction is possibly twice as much.

One of the fundamental theories in physics is that Force = Mass * Acceleration.  Acceleration is simply the change in velocity over the change in time.  This means, if I lift something at a rate of 1 meter per second, and take 1 second to do it, then the total acceleration is 1 meter per second per second, or in physics notation 1m/s2.  Say my mass is 100 pounds, then my total force is equal to 100.  However, how does this change suddenly if I decided to lift it faster?  Well, all of a sudden things change.

If I take the same weight and lift it at a rate of 2 meters/second over the same amount of time (1 second), then my acceleration is now 2m/s2.  What this means fundamentally is that I have potentially doubled the amount of force required for the joints performing the movement by performing the exact same movement faster.  So imagine if you will the impact on your body if you suddenly took the same amount of weight you were used to – and then doubled it.  Your joints might not be able to handle the strain and torque you were putting them under and your risk of injury would increase drastically.

The factors involved here are distance travelled, the amount of mass involved (in our world we’ll take this as the amount of resistance) and also the velocity at which it is lifted.  A practical example can also be for that poor guy with the really long arms who wants to be a powerlifter.  He is certainly at a major disadvantage.  Why?  Because if he lifts a bench press bar up to his full arm extension he may have to move it many inches more than a really big guy who has relatively short arms.  In fact, the distance travelled may be as much as 50% greater.  This is part of the reason that powerlifters arch their backs so much, along with the fact that pushing from a decline position makes it easier to lift the weight.

Never mind the factors of muscle surface area and torque created around his major joints, he is all of sudden, if you take velocity and time into account he has to generate more force in order to move the same weight.  Also, there are other things to consider like his grip on the bar and the distance it travels from his shoulder.  However, if we do some quick math you will find that there are some astonishing things going on.  There is a reason why most successful power lifters are big thick people with really solid technique.

For our situation, I’m going to take a guy lifting a bar .30 meters from chest to full extension, and another guy lifting something .20 meters due to arm length.  They take the same amount of time to complete the lift (1 second).  The mass involved is 100 of whatever unit you prefer.  The first person has to generate a force of 30 in order to lift the weight.  The second person only has to generate a force of 20 – or one third LESS force (according to physics) in order to move the same weight over the same amount of time, purely due to distance travelled.  So the next time you see the guy with long arms pushing far less weight on a bench press, don’t be so quick to judge – he may actually be pushing far more weight in force terms than the big bulky guy beside him.

So an easy way to apply this in the gym while mixing it up is to simply try to accelerate the same weight you have previously been using – but faster.  If you normally take two seconds to lift an object, try to do it in half of the time.  Your joints will take on more force even though you haven’t actually changed the mass in question.  It is a very simple way to change things, but can really be effective.

Centre for Strength and Athlete Development