It’s obviously been a while since I have posted anything, and the funny thing is what has prompted this post was actually something I read that was published by another trainer.

Without going into specifics a fellow trainer (and I use that term loosely because this person is one of the “I won a fitness competition and now I think I’m a trainer” crowd) decided to let everyone know how hardcore they were by putting down other people in the gym around them during a workout and telling people all about how hard they need to work in order to get results.   Some other people even jumped in to give their two cents and tell everyone that if they aren’t passing out or sweating then they are obviously wasting their time and shouldn’t obviously even be taking up space on a piece of cardio equipment next to someone who is so awesome.

My first response to this is obviously a big old middle finger pointed directly at that person and their peanut gallery.  As coaches and people who are asked to hold others accountable trainers should be the last ones sitting there passing judgement on people.  It’s unprofessional and really kind of pathetic.  I hope that any prospective customer looked at that post and quickly said that they wouldn’t want to work with a person like that (or refer anyone to them) because of the judgement involved.  Maybe that “hardcore” attitude works with teenagers and young women who have low self-esteem, but that’s a pretty narrow target demographic if that’s what you’re looking at.  God forbid a woman who has had two kids and really doesn’t like her body gets into the gym for the first time in over a year and is WALKING ON A TREADMILL!?  Maybe for that person doing that IS giving 110% – you have no idea.  Maybe that person uses the gym as an escape from their job.  Maybe they want to get some time alone because they have five kids at home and a husband out of town.  Maybe they have a health condition you don’t know about.  The point is that you have no idea, so don’t pass judgement just because you think in your very closed minded way that unless someone is dying or can’t walk after exercise that they haven’t done anything to their body.  It’s ignorant.  Change in the body can be stimulated by very, very little going on.  Is it going to make the person a ripped shredded pile of muscle?  Maybe not.  How much in our particular industry is based on false reality and BS marketing anyway?  That’s another can of worms.

Just this past week I had a client who is recovering from a knee injury (caused by another trainer making her do stupid things) tell me that she managed to do three minutes on a Stairclimber.  Guess what words came out of my mouth.  “Wow that was a stupid waste of time”?  No.  It was “Good job.”  She was happy about it, and proud that she tried to do something outside of her recent comfort zone.  What makes me sad is that there might have been people in the gym like this idiot looking at her and laughing without having a clue about what her situation was.  You can look around a gym on any given night and see people doing things that might be considered stupid by some, but might actually make perfect sense to that person and what they want to accomplish.  Whether it is CrossFit, Tai Chi, yogalates or whatever there is probably somebody who looks at that exercise and says “what the hell is that person doing?”.  It doesn’t matter – that person is doing what they want to do.  A person in a gym trying to improve themselves should be supported first and judged never.

You know what?  I walk.  I’m a perfectly healthy looking person who used to run marathons and now I have to walk because I’ll pass out if I jog for more than about ten minutes.  I used to deadlift 300 pounds easily but now I can’t lift anything over about 100 pounds because now I know my heart might explode and I’d really rather not leave my family that way.  My workouts are now mostly balance and stability based, and probably look really strange to most people, just like the ones that I sometimes do with my clients.  That’s what is right for them, and my job is to actually care about them and their well-being, not tell them that they aren’t hardcore enough because they aren’t in pain, almost on the verge of passing out or they are doing what they can.  They are strong, healthy and can move properly and that’s 90% of the equation for any situation they have to get themselves into.  Real people need real movement and to stimulate positive change.  We’re not going to even get into the fact that likely if you’re a panting mess on the floor or can’t walk you just did yourself a lot more harm than good.  Exercise as a stimulant is used to heal and improve, not destroy.  Something any trainer really needs to wrap their head around.

So if I’m next to you on the Stairclimber and I’m not dying or almost passing out, just look the other way and mind your own goddamned business.  And please, pretty please get off of whatever pedestal you climbed up on because you got a shiny medal or a trophy mostly due to enhancements that are in no way natural or healthy – even though you will swear up and down and probably tell clients that you’re completely “natural” and that anyone can get that way if they just “give it 110%” like you do.  Stop calling yourself a trainer if you can’t come down to earth enough to realize that your job is to help people, not judge them for what they haven’t or aren’t doing.  So, in conclusion: 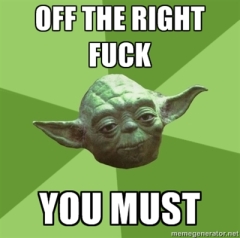