As we move into 2018, we all get suddenly motivated to improve our lives and ourselves.  For most people this involves fitness.  However, my attitude especially over the past couple of years has changed on this topic.

We all basically want to FEEL BETTER.  That’s the ultimate driver in life.  Whether you think you want to be thinner, faster, have a fantastic relationship, a nice house or whatever it might be – this really means we want to feel good day to day.  We want to come home with a feeling of satisfaction and not have negative thoughts.  We want to not be tired.  We want to get rid of things that cause us discomfort.  When you break down living you’re either doing things that are moving you towards better feelings or embracing things that still make you feel crappy.

The main thing you really need to do is DECIDE to make a change and then COMMIT to it for a period of time – or even the rest of your days.  Once you commit and do something for a period of time, often you will realize that either you don’t even miss it, or the benefit of doing or not doing the thing provides you with enough benefit to outweigh the simple pleasure you used to get from it. 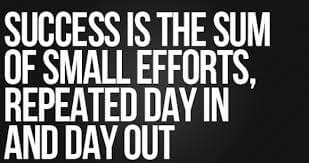 For example, I cancelled my cable probably six months ago.  I was wasting money and time watching television.  Anything I need for entertainment I can get with Netflix and/or streaming shows (for free) the day after.  Do I miss it?  Absolutely not.  Simple thing but it provided a benefit.

I started doing yoga daily thinking I was going to make it 365 days in a row – and then promptly stopped when I went on vacation.  However, I still got 20 days in a row under my belt and felt a ton better and still do.  I’m going to get back on that train as soon as I can.  Is that a failure?  I don’t think so.  It’s proof to my brain that it’s possible.

My goal for January is to do it alcohol and coffee free.  It will help my sleep, save me money and doesn’t contribute anything at all beneficial to my life.  And if I can make it a month, maybe I won’t even go back and just stay that way.  Maybe I’ll drink occasionally.  The point is to make an effort to be consistent and do something beneficial every day – and by the way, NOT doing something is the easiest way to get that done.

Deciding what to do is easy.  Committing to it is often harder.  My suggestion is to start with something small that will provide an obvious benefit almost immediately.  Cutting out one type of food – not a bunch of them.  Doing one small thing that will help your sleep like installing a blue light filter or simply cutting out screens altogether before bed.  Committing to one small bout of physical activity daily, no matter how small.  Any of these can give you momentum and teach your brain that you feel better, and that will make you want to continue.

So if you’re looking for something to do this year, think on how you’re approaching it.  Focus on the right things first.  Make small steps and just focus on consistency and you will be better off tomorrow than you are today, and then a week and a month from now.

If you enjoyed this, please feel free to like, share and let me know!  Until next time.

I’ve written before many times on how easy it is to kick someone’s ass physically.  In fact, I wrote about it previously under “Anyone Can Kick Somebody’s Ass” if you care to check it out.  Many times in my industry clients fall victim to trainers pushing them far too hard, or people are victims themselves by putting themselves through a workout that they have no business doing, especially over a period of time.   Due to the theory of “no pain, no gain” people think wrongly about forces and how they are applied to the body, imagining that the harder they work the faster things are going to move.  In fact many times the opposite is true, and you’re doing yourself far more harm than good by trying to stimulate the body past what it is capable of dealing with.

I was in my local butcher the other day watching a guy cut up various bits of meat while my order was being prepared, and I couldn’t help but think that the instruments he was using wasn’t too far off from what some trainers try to use when trying to mitigate change.  For some cuts there was no precision at all, just a big cleaver that hacked up everything as fast as possible for the sake of getting it done.  Now, these guys are probably better at using a cleaver than anyone because of experience, which can also be the basis for a skilled trainer to be using force like that.  They can hack through a joint without thinking about it because they have done it 1000 times.   They know just where to strike in order to separate things without having to do it again, possibly dulling the blade in the process.

However, then I saw a more delicate operation being done on a fish, which was a very precise series of cuts with a razor thin blade in order to remove bones, which if not done properly completely ruins the meat in both look and feel.  This is the other side of the equation.  If you use a cleaver to debone a fish, you’re going to get a big smelly mess on the floor and the precision that you need just isn’t there.  If you use a scalpel to hack up a chicken, you’re likely to not only take forever but get really frustrated when you try to cut through a joint.  When I’m dealing with a serious injury case, it needs to be precise, focused energy devoted to doing exactly what I want to have happen, otherwise I’m going to potentially make the person worse, not better.  However, if I’m dealing with a person who needs to be able to generate a lot of force for a specific physical act, then maybe they need a different approach.

So does the desired result dictate the tool or the other way around?

In my experience too many people think too much about the outcome and not how they are going to get there.  They are so focused on the goal and willing to do whatever it take to get there they forget about the tool, and that in the physical world there is an endless amount of tools at their disposal in order to achieve that goal.  This is where real skill as a trainer enters the picture.  Just like a master chef, a really good trainer can pull out a variety of tools in order to create the desired outcome that they are looking for, whether it be simple movement, higher amounts of force, or even something like changes to lifestyle for a client.  Some people need a cleaver because they need to have things completely changed – and they can handle the force.  Some require a bit of a finer touch and just some very precise modifications in order to keep their progress moving forward.  Many clients prefer the cleaver, thinking that the best approach is just to smash everything, when the scalpel is often what is needed, especially at the beginning of an exercise program, or a change to what you are trying to accomplish.  The ego can easily get in the way.

So the next time you are evaluating your exercise program, ask yourself – what tool do you need in order to make things the most effective for what you are trying to achieve at that moment?  And on top of that, would you be better off using another tool at that point because the one you really want to use or are used to using doesn’t do the right thing?  This requires thought and constant evaluation.  The benefit of working with someone who knows how to do this is that it takes the guess work out of it for you.  However, even if you are working on your own just remember that tools are just that – tools.  It is the person behind them performing the movement or coaching you through the movement that is actually causing the change.  Make sure that you are using the right ones.  And that the person you are trusting with your physical health has as many tools as possible in order to get the job done.

And if anyone in Ottawa needs a good butcher, just let me know.