The full title of this should be How To Shovel Snow (And Not Hurt Yourself).  We just had our first fairly serious snowfall in Ottawa and inevitably this brings on clients starting to shovel large amounts of the white stuff.

This also inevitably brings on back problems, shoulder problems and even knee problems from doing this seemingly simple activity.  If I told you to pick up a 20 pound weight, for most of you it isn’t a problem (especially if you work with me).  However, if I told you to pick it up, then throw it about five feet beside you while twisting, then repeat that about 200 times you might be a bit sore.  This is actually what you do when you’re shoveling snow, it’s just you don’t realize it.

Some simple physics:  The further something is away from you the heavier it is on your joints.  This is actually an exponential relationship, meaning if something is twice as far away, it is four times the load.  So my first basic thing is to have a compact shovel – the shorter handle you can manage the better.  However, this is sometimes a trade off for having to bend more, which we will get to in a second.  Having the right shovel in terms of size and length can help in the long run.

Tip #1:  The place people run into problems most while moving snow is that they tend to pick up a load, then twist and throw it.  Twisting under load makes your lower back extremely vulnerable, especially with a flexed spine (ie bent forward).  Position seem familiar? 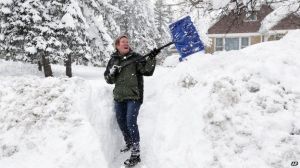 Oh that feels so good on my back!

If you can pick up the load and throw it straight in front of you it lowers the impact on your back significantly.  Pushing it in front of you also works, using one of those large sled like shovels.  It may take some creative positioning but your back will thank you.

Tip #2: People have a dominant side, and feel more comfortable moving with that side.  My next tip is to switch sides frequently in order to give one side a rest.  You can do this with every 10 shovel loads, every 5 or whatever you like.  Make a system and use it.  Not only will this help your back, but it will also lower the impact on your shoulders and arms.  This usually means you can go for longer if you need to.  However, this isn’t always the best way to do things.

Tip #3:  If you’re not in fantastic shape and don’t have good cardiovascular health, take frequent breaks – even long ones.  The snow isn’t going anywhere (until April) so you have lots of time.  Lifting and repetitive movement is hugely anaerobic activity and can get your heart rate to dangerous levels for long periods of time (hence frequent heart attacks).  Keep your exertion levels in check.  If you need to, stop and take 2 minutes – is your heart rate back to below 60% of your maximum?  Then continue.  As you work harder, your body will take longer to recover from the exertion and if you find that your heart rate isn’t coming back down even after 5 minutes then stop the activity altogether and come back after a long break.  Don’t be a hero just because you want to get the driveway finished.  It’s hard work just like any other workout.

Tip #4:  To save your shoulders, try to keep your arms bent, especially when you have a loaded shovel and you’re lifting.  Having your arms extended puts most of the load directly on your shoulders and they usually aren’t strong enough to support it.  Again, imagine if I handed you a 20 pound bar and asked you to hold it straight out in front of you.  Your shoulders would think it was about 80 pounds.  If you simply bend your arms, and put some force into your biceps and wrists then the load is lessened to the shoulder significantly.

Tip #5:  Shovel more frequently if there is a large snowfall.  Doing it 2-3 times with a small amount is much better than trying to move 30 centimeters all at once.  So many people wait until the snowfall is over and then move a huge amount all at once, rather than moving 1/3 at a time 3 times.  Again, in terms of overall volume this will greatly reduce the potential for overload and therefore injury.  Better to lift half the amount more often than a larger load and increase risk of hurting yourself.

We here in Ottawa embrace winter (or at least we’re supposed to).  Don’t let something as simple as clearing your driveway be the reason you have to rehab a serious back injury or shoulder problem this holiday season.

If you enjoyed this article, please feel free to SHARE it on social media.  And, if you have a problem with your back or shoulders you need help with, feel free to contact me at strengthrehabottawa@gmail.com or on Twitter @strengthottawa or find me on Facebook here.

As a bonus, here’s my dog Woofie enjoying the snow!  Hope you have a great day!