This was inspired by a client of mine who wanted to restart yoga after a bad back injury.

What if, as a trainer I told you that we were going to do an exercise that did the following:

I want you to lengthen out your posterior chain as much as you can, throw both of your shoulders into extreme extension, put yourself into spinal flexion (even if you can’t properly tilt your pelvis) and stretch out your hamstrings and calves as far as they can go (thereby also yanking hard on your sciatic nerves) – oh, and do it while loaded with up to 70% of your body weight, and the load increases the further you get into the exercise.  So for a 150 pound female that would mean their shoulders and knees are loaded in extension with up to 105 pounds on their spine and other joints.

Does that sound like a good idea for anyone, let alone people recovering from injury?

The funny thing is, people in yoga classes do this almost every day.  It’s called a downward dog. 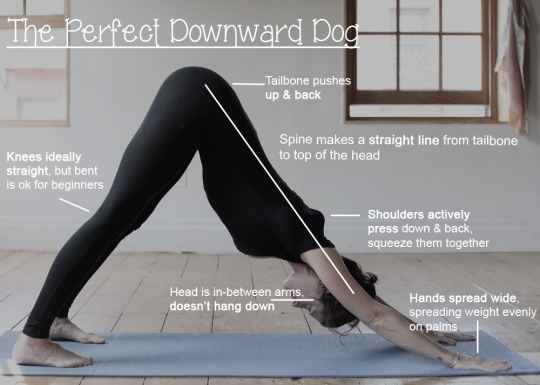 Now, before the yoga community absolutely freaks out and starts thinking I’m bashing the movement, I’m not.  All I’m doing is providing a practical analysis of what people are required to perform to get into this position.  I’ve had a client recently with severe back issues try to get back into yoga and the one movement she had immense trouble with (not surprisingly) was this one.   I’ve also attended yoga courses where thankfully the instructors were aware of the limitations of this movement and realized that not everyone should perform a downward dog – in fact several of my most respected colleagues actively discourage it since they have realized what it does.

On the flipside I’ve also been to yoga classes where the instructors did absolutely NOTHING except for sun salutations over and over again.  You can guess which class I didn’t go back to.

“BKS Iyengar, one of the foremost yoga teachers in the world asserts that this asana stretches the shoulders, legs, spine and whole body; builds |strength throughout the body, particularly the arms, legs, and feet; relieves |fatigue and rejuvenates the body; improves the immune system, digestion and blood flow to the sinuses, and calms the mind and lifts the spirits.”  (ripped from Wikipedia) – and it does all of these things.

But what people need to realize as a whole is that some movements that you perform in a typical yoga class are very hard forceful strength movements.  Simply because it is packaged as something healthy and therapeutic doesn’t mean that it is.  Just like any other type of exercise, it needs to be tailored to the person participating in it.  A 200 pound deconditioned person has absolutely no business getting into this position and here’s why:

Here’s what people need to be able to do into order to successfully perform this movement:

Put your arms overhead fully or even behind the torso while internally rotated.  This requires a healthy rotator cuff complex, the rib cage to be able to move and the shoulder blade to be able to move with proper rhythm.  One loaded movement I often have clients do to test this area is a loaded shoulder extension (think a front raise but over the head with a cable) at various angles in order to engage the entire shoulder complex.

Hinge the hips with proper pelvic movement so that the lower spine isn’t flexed forward putting strain on the lower spine with load – while it’s flexed.  Think loaded Romanian deadlifts, and even things like good mornings (I have a bias against these because of where the load is placed but whatever).  Just because your hands and feet are on the floor doesn’t mean there isn’t a ton of pressure going through the lower spine in this position.

Fully extend the knees and dorsiflex the ankles as much as possible – general limits here are thought to be 30 degrees but most people have much, much less than that.  Generally here in a squatting position I look for the ability of the knee to travel forward properly and therefore dorsiflex the ankle.  Can you squat low?  Or does your person have longer legs relative to their torso?  Are they recovering from a knee issue that might be contraindicated to full knee extension (like a meniscus injury?).

There can be many restrictions in this area and it also has the highest risk of issue due to the excessive load people will put on their knees in order to force themselves into a straight legged position.  The restriction might also come from hamstrings, calves or somewhere else, not even the ankle.

So here’s my question:  Can or should you do all of these things and hold them for time?  No?  Maybe this movement isn’t for you.

What people need to realize is that even though it is relaxation based and supposedly “stretching”, yoga is still force on joints.  Sometimes a lot of it.  Another common flaw of the downward dog is that people will generally run away from weakness.  This means that if they are weaker in the shoulders and have trouble there they will dump more load into their lower body in this position.  If they are weaker in the lower half they may dump more load into their upper body.  I have seen this often in classes.  And it can cause a serious problem if suddenly the load shifts by 20-30% into the wrong area suddenly due to a weakness somewhere else.  However, due to the nature of the position there isn’t any way to get out of it.  Except for compromising by say, lifting your heels or bending the knees or even elbows to put load elsewhere.

So what are some good modifications?  Well, like in any other loaded position if you can take the load off a bit, then the person can attempt the range of motion without the excessive joint force.  For example, a person with good shoulder mobility but poor posterior chain range and pelvic movement might want to perform a simple hip hinge with their shoulders extended and brace their upper body against something.  Prenatal classes often recommend this. 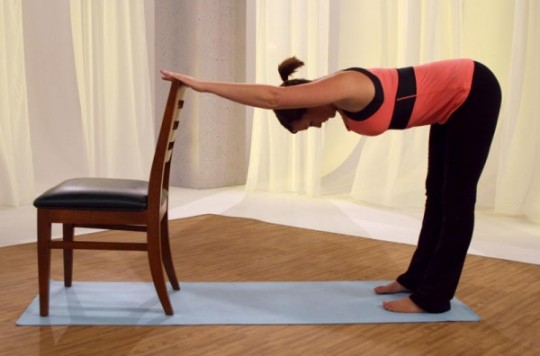 Another option might be to intentionally elevate the heels and bend the knees as I expressed earlier.  You can also bend only one knee or alternate sides.  For less force on the arms and shoulders, lower the body and rest the forearms on the ground.  These are all modifications that can easily be suggested in a class but often aren’t.  During a busy class most instructors just don’t have the chance to go around and suggest individual modifications to people.

Or here’s a thought – don’t do it.  There are ways to work up to this movement, just like any other yoga movements but so many people make the mistake of jumping in and following along, and then wonder why they are sore the next day and never want to go back.

The good news is that with my modifications to her positions and telling her to skip downward dogs my client successfully navigated two yoga classes and has been able to get back in touch with something she previously enjoyed but couldn’t do.

Don’t get me wrong, I’m a fan of yoga.  I’m a fan of anything that keeps people moving, enjoying loaded positions to develop strength and will over time develop additional range of motion.  I’m also a big fan of the relaxation side of the practice and allowing people to be in a parasympathetic state, even if it is only for five minutes at the end of class in savasana.  It’s something most people should do a lot more of.  The reason I’m writing this is to make sure that if you are about to jump back into yoga because you think it is a good way to ease into exercise again – it might not be depending on the class.

As always, if you have comments feel free to comment here or email me at paradigmfitnessottawa@gmail.com.  Good luck with your future practices!